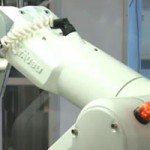 We had mentioned it before but now just recently The University of California San Francisco Medical Center debuted the world’s largest robotic pharmacy. Costing upwards of $15 million the ground breaking technology was created in hopes of raising productivity while reducing human error down to zero as it administers not only regular prescriptions but handles enhanced chemotherapy dosing as well. So far this space-age drug bot is batting 1.000 with not a single flub during it’s initial phase-in of 350,000 doses of medication at the hospital.  iMedicalApps has more on the story including a video press release from the university.